Did you know this masterpiece of corsican literature ?

I love the fact that a text of political propaganda can also be such a songbook !

I let you with it. Good night :

The chief satisfaction of these islanders when not engaged in war or in hunting, seemed to be that of lying at their ease in the open air, recounting tales of the bravery of their countrymen, and singing songs in honour of the Corsicans, and against the Genoese. Even in the night they will continue this pastime in the open air, unless rain forces them to retire into their houses.

The ambasciadore Inglese, The English ambassadour, as the good peasants and soldiers used to call me, became a great favourite among them. I got a Corsican dress made, in which I walked about with an air of true satisfaction. The General did me the honour to present me with his own pistols, made in the island, all of Corsican wood and iron, and of excellent workmanship. I had every other accoutrement. I even got one of the shells which had often sounded the alarm to liberty. I preserve them all with great care.

The Corsican pesants and soldiers were quite free and easy with me. Numbers of them used to come and see me of a morning, and just go out and in as they pleased. I did every thing in my power to make them fond of the British, and bid them hope for an alliance with us. They asked me a thousand questions about my country, all which I cheerfully answered as well as I could.

One day they would needs hear me play upon my German flute. To have told my honest natural visitants, Really gentlemen I play very ill, and put on such airs as we do in our genteel companies, would have been highly ridiculous. I therefore immediately complied with their request. I gave them one or two Italian airs, and then some of our beautiful old Scots tunes, Gilderoy, the Lass Patie's Mill, Corn riggs are Bonny. The pathetick simplicity and pastoral gaiety of the Scots musick, will always please those who have the genuine feelings of nature. The Corsicans were charmed with the specimens I gave them, though I may now say that they were very indifferently performed.

My good friends insisted also to have an English song from me. I endeavoured to please them in this too, and was very lucky in that which occurred to me. I sung them "Hearts of oak are our ships, Hearts of oak are our men." I translated it into Italian for them, and never did I see men so delighted with a song as the Corsicans were with the Hearts of oak. "Cuore di quercia, cried they, bravo Inglese." It was quite a joyous riot. I fancied myself to be a recruiting sea officer. I fancied all my chorus of Corsicans aboard the British fleet.

It has been published in 1768, by James Boswell, in London ; its title ? "An account of Corsica. The journal of a Tour to that Island, and Memoirs of Pascal Paoli".

You knew it, no ?
Publié par François-Xavier Renucci à 22:41 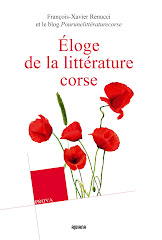